What is the distance between Russia and America? Write it down… 99 percent people will give the wrong answer!


The war between Russia and Ukraine continues unabated. During the last two months, the attacks between the two countries have intensified. Russia is continuously doing airstrikes. Russia has fired missiles at several cities in Ukraine, some of which have fallen in NATO country Poland. Tension has increased after this accident. In such a situation, America has said that it will protect every inch of NATO territory. The question arises whether America can attack Russia in such a situation? That’s why people are searching on social media that what is the distance between the border of Russia and America? But most of the people are giving wrong answers to it.

After seeing the world map, many people feel that there is a distance of thousands of kilometers between America and Russia. But if you look carefully at Google Map, then the truth is something else. There is a distance of about 55 miles i.e. about 88 kilometers between the mainland of Russia and the American state of Alaska. But there is also a place in the middle of the ocean where you can walk to the border separating Russia and America. And this distance is 2.4 miles i.e. about 3.8 kilometers. 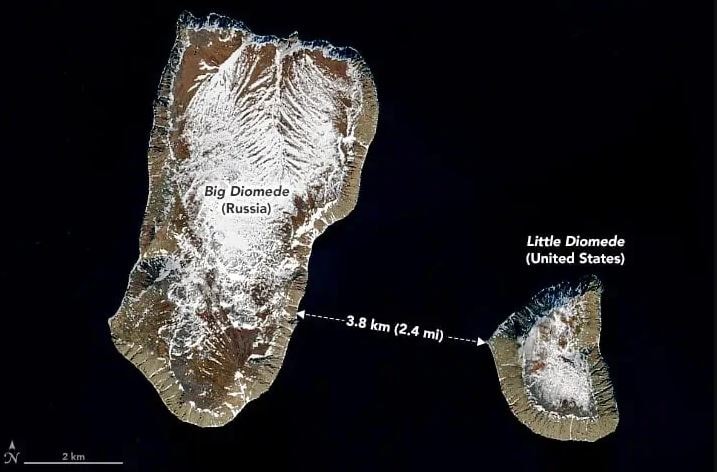 border between two islands
Let us tell you that in the year 1867, America bought Alaska from Russia. After this, the two countries drew a line between two small islands in the Bering Sea to determine the boundary. These islands are Big Diomede and Little Diomede. Big Diomede is in the part of Russia. While Little Diomede is on the US side. The distance between these two is 3.8 kms.

How is the limit determined?
Big Diomede and Little Diomede were sparsely populated places until the Cold War. Until 1948, people lived on both islands and could visit each other freely. Used to cross about two and a half miles of water by boat. Whereas in winter due to freezing of water, people used to cross this distance on foot. That year Soviet forces established a base on Big Diomede, also known as Ratmanov Island, and the islanders were forcibly resettled to the Siberian mainland.