In addition to those killed, more than 300 people have been seriously injured and at least 600 more have suffered minor injuries. 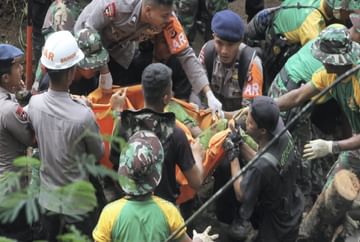 Indonesia The death toll from the earthquake in Java island rose to 268 on Tuesday while 151 people are still missing. National Disaster Relief Agency gave this information. The agency said that the work of extracting more bodies from the debris of the buildings is going on continuously. Agency chief Suharyanto told the media that another 1,083 people were injured in the 5.6-magnitude quake that struck near the city of Siangjur on Monday afternoon.

Officials said that in addition to those killed, more than 300 people were seriously injured and at least more than 600 people suffered minor injuries. Frightened by the earthquake, residents came out into the streets, some of them covered in blood. The buildings around the rural area collapsed due to the earthquake. A woman named Pertinem told that when she felt the tremors, she came out of her house with her family and shortly after that her house collapsed.

#UPDATE The death toll from an earthquake on Indonesia’s main island of Java jumped to 268, reports AFP News Agency https://t.co/SrW2TOaIot

She said, ‘I was crying and I immediately came out with my husband and children.’ The woman said, ‘If I had not pulled them out, we too could have lost our lives.’

Our goal is to find all the victims – Henry

The quake triggered landslides in the village of Cijedil, northwest of Siangjur, blocking roads and collapsing several houses, said Henri Alfiandi, head of the national search and rescue agency. He said, ‘We are carrying forward the operation at many such points where it is suspected that there may still be casualties. Our team is also trying to reach far-flung areas. He said, ‘For us, all the victims are a priority, our goal is to find them and get them out as soon as possible to save their lives and provide medical assistance.’

rush of patients in hospitals

There is a crowd of patients in the hospitals. Patients lie on stretchers in a tent outside, waiting for further treatment. West Java Governor Ridwan Kamil said many of the dead were public school students who were taking extra classes at madrassas after finishing their classes for the day. Rescue work was initially hampered by damaged roads and bridges, power outages and a lack of large equipment to clear the heavy concrete debris. By Tuesday, the power supply and communication system began to improve.

Public Works and Housing Department spokesman Andra Atmavidjaj said the rescue operation was focused on about a dozen places in Cianjur where people are still feared trapped. He said, ‘We are making all efforts to save the people.’ Atmavidjaj said seven excavators and 10 large trucks were deployed from the neighboring cities of Bandung and Bogor to clear fallen trees and mud from roads.

Cargo trucks carrying food, tents, blankets and other supplies from Jakarta arrived at the temporary shelters early Tuesday. Still, thousands of people spent the night in the open for fear of aftershocks. Indonesian President Joko Widodo visited Cianjur on Tuesday and assured the people of the government’s help to the needy. Many houses have collapsed due to the severe earthquake and aftershocks that occurred on Monday in Indonesia’s main island Java.

The US Geological Survey said the 5.4-magnitude quake was centered in the Cianjur region of West Java province at a depth of 10 kilometers (6.2 mi). According to Indonesia’s Meteorology and Climatology and Geophysical Agency, 25 more aftershocks were recorded after the earthquake. Earthquakes are frequent in the vast archipelago nation, but it is unusual to feel them in Jakarta. Indonesia’s population is more than 270 million and it is frequently affected by earthquakes, volcanic eruptions and tsunamis. (input from language)