The magnitude of the earthquake in Indonesia was recorded at 5.4. Dozens of buildings were damaged on Monday due to the earthquake and many of the people running for their lives in the streets and alleys were seen injured and covered in blood. 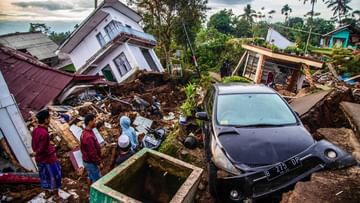 Many people are feared to be buried under the debris.

There has been a huge loss of life and property due to the strong tremors of the earthquake in the Java island of Indonesia. So far 162 people have died, but it is being said that the death toll may increase further. because many people buildings collapsed due to earthquake are buried under the debris. The rescue team is continuously engaged in the rescue operation. The rescue team is facing many difficulties to carry out the rescue operation. It is becoming difficult for them to search for people from the high debris of the collapsed buildings. Some places are such that it is difficult to reach.

A personnel involved in the rescue team told that we are using saw machine and earth digging machine to break the pile of fallen trees and debris to reach the areas where civilians are likely to be trapped. . National Disaster Mitigation Agency BNPB told that 25 people are still buried under the debris in Cianjur. Java Governor Ridwan Kamil said that most of the 162 people who died were children.

Today the search operation has become more challenging as the road is blocked in some areas of rural, hilly area and the problem of its cutting has arisen due to damage to electric poles. West Java Governor Ridwan Kamil told that more than 300 people have been injured in the damage caused by the earthquake and more than 13000 people have been taken to the evacuation centers. The tremors were felt as far as the capital Jakarta, after which doctors treated patients in makeshift wards.

25 more tremors occurred after the earthquake

The magnitude of the earthquake in Indonesia was recorded at 5.4. Dozens of buildings were damaged on Monday due to the earthquake and many of the people running for their lives in the streets and alleys were seen injured and covered in blood. At the time of the earthquake, most of the children studying in public schools were taking training in Islamic schools after completing their studies. Siyanjur has the largest number of Islamic residential schools and mosques. There have been accidents in many Islamic schools after the earthquake. It was told that after the earthquake, about 25 more tremors were recorded. Let us tell you that the population of Indonesia is more than 270 million and it is often affected by earthquakes, volcanic eruptions and tsunamis.


There was an earthquake in Sumatra province in February