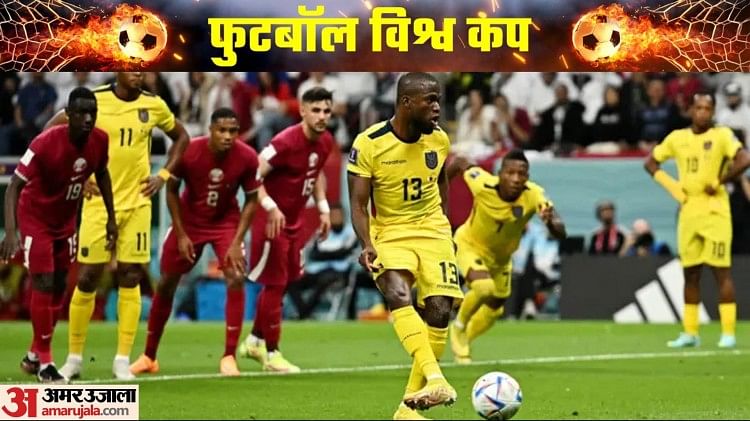 Hosts Qatar lost against Ecuador in the opening match. He suffered a 0-2 defeat at the Al Bayt Stadium. Ecuador has secured three points by winning this Group-A match. Captain Ener Valencia scored both goals for Ecuador. He has scored a total of five goals in four matches in the World Cup. After this defeat, an embarrassing record has been recorded in the name of Qatar.

For the first time in the history of the World Cup, a host team has lost in the opening match. Now Qatar will be eyeing upsets against Netherlands and Senegal in the next two matches. They would not like to be knocked out in the first round of the World Cup like South Africa. In 2010, South Africa was the only host country in World Cup history that did not progress beyond the group stage of the World Cup.

Qatar’s next match will now be against Senegal on 25 November. At the same time, the Ecuadorian team will take on the Netherlands on the same day.

Qatar vs Ecuador Live Score: 10 minutes left in the match

There is now 10 minutes left for the opening match to end. Ecuador’s team is ahead 2-0 till 80 minutes. Qatar will now have to pull off a miracle to claw their way back into the match. If he loses, it will be a shame for him at home.

Qatar vs Ecuador Live Score: There were two types of games after halftime

There are two types of play after halftime. First- Qatar has prevented Ecuador from scoring. Second- The Ecuadorian team does not want to score goals on its own. They have been satisfied with two goals and have now come down to defending. Ecuador played fast in the first half. The second half has been far more disappointing than the first in terms of football.

Qatar vs Ecuador Live Score: One hour of play completed

One hour of play has been completed in the opening match. Qatar has done well in the second half. He has made several attempts on goal, but he can’t get the end right. Qatar has 30 minutes to get back into the match.

Qatar vs Ecuador Live Score: The game starts after halftime

The game has started after halftime. Ecuador leads 2-0. The challenge before Qatar is to make a comeback. He would not like to lose in the very first match on his home ground.

Qatar vs Ecuador Live Score: Ecuador ahead by halftime

Half of the game is over in the first match. Ecuador lead 2-0 against Qatar at halftime. For him, both the goals have been scored by the captain Valencia. Qatar’s team has not been able to compete with Ecuador in this match so far. There will be pressure on him to bounce back in the second half. In the 92-year history of the Football World Cup, so far no host country has lost the first match.

Ecuador’s captain Valencia scored the second goal. He pounced on Pereciado’s shot to head the ball into the post. His excellent header put Ecuador ahead 2-0 in the 31st minute.

Ecuador scored the first goal in the 16th minute. Qatar’s goalkeeper Shad Al Sheeb tried to stop the Ecuadorian captain in the box. The referee called it a foul. He was given a yellow card and a penalty to Ecuador. Captain Valencia gave the team a 1-0 lead this time. His first goal was disallowed. Valencia has scored four goals in four World Cup matches.

Qatar vs Ecuador Live Score: Ecuador’s goal off side agreement

Ecuador started the match in a stormy fashion. His player Valencia put the ball in the goalpost in the third minute itself. However, the VAR (Video Assistant Referee) disallowed it. Thus Ecuador missed out on taking the lead in the third minute.

Qatar vs Ecuador Live Score: Qatar will leave the controversies behind to leave a mark

Qatar is facing criticism from European countries on issues like human rights abuses and alcohol ban. Along with this, the host country is also being accused of fixing the match. Amidst these controversies, the host team would like to leave its mark in the world of football by performing brilliantly in the World Cup.

Qatar vs Ecuador: Qatar crushed by Ecuador, the host team lost the opening match for the first time in the history of Football World Cup

Hello, welcome to the live blog of Amar Ujala. The first match of the FIFA World Cup will be played between the hosts Qatar and Ecuador. Qatar’s team would not like to be eliminated from the first round of the World Cup like South Africa. In 2010, South Africa was the only host country in World Cup history that did not progress beyond the group stage of the World Cup. Such a challenge will also be in front of Qatar.