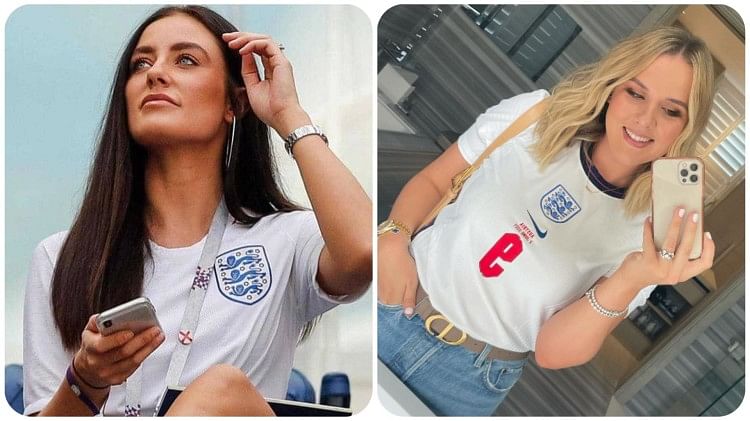 The FIFA World Cup 2022 has started. On the third day of the tournament itself, the fans got to see a big upset. Saudi Arabia has surprised everyone by defeating Argentina’s team, which is considered to be a strong contender to become the World Cup champion, by a margin of 2-1. However, England had a great start to their World Cup. This country has won the T20 World Cup in cricket almost a week ago and on the basis of Harry Kane, England is now also claiming to win the FIFA World Cup title.

England beat Iran by a huge margin of 6-2 in their first match and made a great start to the World Cup. Many players scored goals for England. The wives of these players had also reached the ground to encourage them. Here we are telling about the wives of England players, who beat everyone in terms of beauty.

The England football team, led by captain Harry Kane, is looking in great touch and has won the first match by a huge margin. Harry Kane’s wife Katie Goodland has also reached Qatar to support him. Katie Goodland is a fitness coach. Harry Kane proposed to her in the Bahamas. Both had come here for a holiday. The couple had become parents of two daughters even before marriage. The names of their daughters are Ivy and Vivienne.

Fern Hawkins, wife of England defender Harry Maguire, is no less than anyone in terms of beauty. Both of them got engaged in the month of February before the World Cup in the year 2018. Hawkins is a physiotherapist and photoblogger. However, it was her association with Harry Maguire that brought her fame. Now he is very popular on social media.

England football team legend Raheem Sterling is married to British model Paige Milian. Paige is a model of Indo-American origin. Paige had decided to quit her job and be with Raheem Sterling. After this she became very much discussed. These two are also good friends with each other.

Luke Shaw has also been an important player of the England team. His wife Anushka Santos is also very popular and beats many actresses in terms of beauty. They are also the parents of two children. Though the two never open up about their relationship, Anushka is often spotted at the stadium during Luke Shaw’s matches.